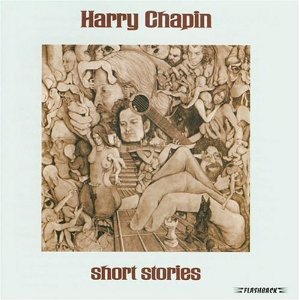 I can tell you exactly where I was on July 16, 1981: stuck in a ghastly traffic jam on the Long Island Expressway. I was heading out to my boyfriend’s house, when all came to an absolute standstill. Reports came in over the radio of multi-lane closures, due to what sounded like a horrific accident involving a small car and large truck. Those of you who are fans of a certain type of 1970s music know where this story ends. Harry Chapin was the driver of that small car, and he died thirty years ago today.

I spent much of my life hiding my love for the easy listening folk rock of the 1970s.  As a genre, it gets little respect. Disco has gone from cultural joke to being considered the iconic music of a gay sub-culture that was unknowingly dancing on the edge of an apocalypse. Bruce Springsteen and the like will always get respect. Punk and new wave, with their angry anarchy, became the music of leftwing intellectuals everywhere as the Free to Be … You and Me era ended in Ronald Reagan and Margaret Thatcher.

Folk rock, on the other hand, is marked by an earnestness and sincerity that plays as hokey in our more ironic age. It’s often about failure, which might also be why it gets little respect since we are, after all, a society that’s uncomfortable with anything but tales of triumphant progress. Much of folk rock describes how things did not work out. And no one got all that better than Chapin, a man who, despite the love of family, friends and fans, understood loneliness and despair.

My introduction to Harry Chapin came via my parents. My mother was (and still pretty much is) a rabid Chapin fan, and one who figured out it was easier to buy me a ticket for his concerts than to hire a babysitter. As a result, I saw any number of Chapin performances with the parents, but the only one that I can recall with any precision was in what I believe was St. Ann’s Church in Brooklyn Heights, where we arrived early enough to snag the front pew. It was a joyous occasion, with much singing along by the audience and laughter.

In a decade that celebrated the self, Chapin sang about strangers. He had an ability to capture the lives of others in a way that suggests in another age he might well have been a novelist. He brought to life the forgotten and forlorn, like the midnight watchman and the overweight barmaid of A Better Place to Be, John Joseph and the nameless narrator of Corey’s Coming, the crazed whaler’s widow of Dogtown and too many others to list here. Chapin’s songs are five to ten minute tales of loss, rejection and the human ability to find hope and salvation in the worst circumstances. It’s music for adults.

Today we live in a world of frantic activity, one that is designed to cover-up our loneliness, increasing isolation and financial precariousness. We’re busy, busy, busy but bowling alone and bowling scared. Harry Chapin, I suspect, could have written many great songs capturing our current reality. If only, to paraphrase a line from Circle, we could have gone round with him one more time.

Aaron Goldstein at The American Spectator

Neil Steinberg at The Chicago Sun-Times