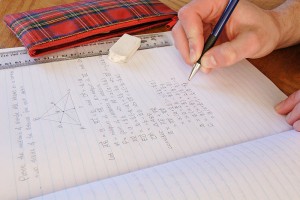 My older son is in junior high school now, and he comes to me frequently with tales of who did what to whom and asking me to weigh in. I almost always determine, after about a minute of listening to the incident of the day, that there are no innocent parties involved in the fracas. “They’re all wrong,” I pronounce.

It’s a concept foreign to most Americans. We like our good guys and our villains. How can they all be wrong? Isn’t there one person more wrong than the other? How can people attempting to do good be so ridiculously and unintentionally awful? How can there be order in the world if we are all, on some level, villains?

No, this isn’t a post about Anthony Weiner and Andrew Breibart, though it could be. Instead, it’s about the article in the New York Times asking why a substantial number of students attending New York’s most elite independent schools need so much tutoring that some of their families are spending more money on private coaches for their children than on the not-unsubstantial tuition bill itself. Exhibit A is the Riverdale Country School, a school, where one anonymous parent ‘fessed up to spending six figures on her progeny’s outside helpers, on top of the school’s $38,800 annual tab to attend. The schools claim to be deeply unhappy about the situation.

When I read through the article, I quickly came to the conclusion it was a textbook case of everyone involved being wrong.

First villain? The schools. They shouldn’t be offering up classes that a decently bright and motivated student can’t figure out a way to get a “B” in without significant outside help. Now they can either go off and admit a bunch of smarter students, or admit that maybe, just maybe, they are asking too much of a bunch of 16 year olds and re-jigger the problematic classes. They can whine and cry all they want to the New York Times about how they don’t want their students seeking outside help, but many of these schools are notorious pressure cookers, and the administrators are the ones stirring the pots. Why? That brings us to the next paragraph.

Second villain? The colleges and universities. The Ivy League, Little Ivies, Seven Sisters and the other prestigious institutions of higher education where parents spending just south of $40,000 in annual high school tuition aim to send their progeny can bleat all they want about how they are really, really seeking out well-rounded students, and not a bunch of automatons capable of getting an A in subjects ranging from English to Chemistry, while learning to play tuba, running the field hockey team, acing the SAT and, in their spare time, volunteering at the local homeless shelter but, if that were the case, they would actually be admitting the occasional non-connected decent student. But, in fact, that is not happening. “Gone are the days of a student who was excellent at math and science just getting by in English and history; now everyone is expected to be good in everything,” reporter Jenny Anderson writes. In other words if, say, Harvard began to actually do what it claims to be doing in its admissions offices, this problem would solve itself within a year or two.

Villain three? If you are reading this post, you’re probably it. I’m it, though I don’t like to think of myself as one of those people. For the dense, I’m talking about you, mom and dad. Our children aren’t perfect. They are (strangely, just like us!) going to fail things, occasionally fuck up, and otherwise not perform up to the expectations of others. The best thing we can do as parents isn’t tossing money around so we buttress our kids from ever screwing up. It is, instead, allowing them to see the world doesn’t end if you are just great in math and science but not everything else. It’s teaching them their own hard work, not the hard work of the tutor you are paying, will get them ahead in this world. It’s showing them that effort is its own reward and that a “B” is a perfectly acceptable grade. And, finally, it’s showing them that money can’t buy everything. For starters even if you have the trust fund to pay the hourly bill, you can’t bring a tutor to work.