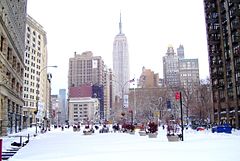 I’ll say this for New Jersey blowhard governor Chris Christie: When he performed his Christmas week disappearing act just in time for yet another snowpocalypse, he at least had the brains to leave a Democratic machine politician in charge of things, the sort of guy who knows one of the first rules of northeastern politics is this: do whatever you need to do, make whatever backroom deal you need to make, payoff whomever you need to pay off, but get the goddamn snow off the streets. Fast.

New York City Mayor for Life Mike Bloomberg, cocooned his world of Wall Street privilege, somehow never figured the golden law of snow out. And now word comes down that the city’s snow clean-up disaster might not have been as a result of simple poor planning, but a deliberate campaign of sabotage by the worker bees in the city’s sanitation department.

Well, knock me over with a fucking feather.

New York City’s garbage finest are not the most stellar of employees in the best of circumstances. As anyone who has ever lived in five boroughs knows, they have a bit of a work attitude problem. Usually this is expressed by a particular method of tossing garbage onto trucks, a way that seems to result in a certain percentage of refuse falling onto the streets. They make it seem so natural that it wasn’t till I moved to Los Angeles in my mid-20s that I discovered that, for sanitation department workers, making sure household trash bags actually landed in the back of the garbage truck without spilling open did not require anything in the way of special skills.

And for municipal employees, these are not good times. Budgets are being decimated, and, in New York City, the city’s sanitation department workers suffered layoffs and demotions last year. That’s bad enough anywhere, but New York City, budget woes not withstanding; there is one group here that has not suffered from the economy in any way proportionate with the rest of us. In fact, this group is a net winner. For those of you who live with their heads stuffed in a paper bag, that’s the folks on Wall Street, the group from whence the Mayor for Life springs, where the bonus pool is large and the living is good.

New York City is quickly turning into a city of entitled haves and have mores, the sort of people who think it’s perfectly ok for themselves to earn millions of dollars even as they demand those five figured (and that’s annual salary, not bonus) municipal employees sacrifice and sacrifice more.

It’s no surprise that an organized group figured out a way to let us know how important they really to our well being they really are even as they shoved a metaphorical middle finger in our faces. The only surprise is that it took us almost a week to realize what was going on. We are, it seems, so unused to acts of working class rage we don’t even know them when we see them any longer.

I only have one word of advice for the sanitation department. Next time, lay off the good folks of Crown Heights. They have enough problems. If you are going to stage another snow removal protest, start with East 79th Street instead.

Photo: Beyond the Ken